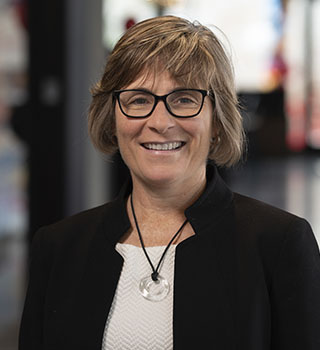 ​With a long history of community leadership, Meg currently serves as Board Chair of the following:  Early Childhood Alliance, Work Train, ABC Cayuga Play Space, Syracuse Urban Partnership, and as Treasurer of Blueprint 15.  She also serves on the Board of Directors and Executive Committee of CenterState CEO and is a member of the Mayor’s SURGE Executive Committee and the JPMorgan AdvancingCities Partner Council.

Meg has spearheaded the founding of a new nonprofit entity, the Syracuse Urban Partnership, that constructed the Salt City Market in downtown Syracuse.

In the past two decades, Meg has also served on numerous nonprofit Boards including Onondaga Community College, Syracuse 20/20, FOCL, Skaneateles Library Association, Wells College Board of Trustees and Planned Parenthood of Rochester/Syracuse.  From 2014-2015 she served on the Board of Education for the Skaneateles Central School District.

​Prior to joining the Allyn Foundation in 1994, Meg worked in development, marketing and outreach for a number of nonprofit organizations, including Planned Parenthood of Syracuse and the Shelter for Help in Emergency, a battered women’s shelter in Charlottesville, Virginia.  She and her husband also taught at the American School in Switzerland.

​A graduate of Dartmouth College, Meg lives in Skaneateles with her husband, Eric Allyn. They have three wonderful daughters.